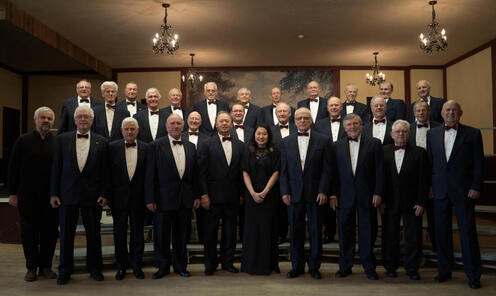 With the dissolution of the Alpenclub Mixed Choir a group of interested singers, some part of a double quartet, including Adolf Fluested, Paul Floch, Hans Hirsekorn, Willy Pfortmueller, Kurt Schäfer, Thomas Spann and Richard Wolf, met in the Alpen Club in late 1964 to prepare the ground for the formation of a male choir.
After a few Monday practices in the basement of the Vancouver Alpen Club, it was decided to begin in earnest in January 1965, as a group of singing soccer players, Gerd Koenig, Hans Poggenpohl, Norbert Schottko, Willi Soehn, Eddie Ternes, Tony Ternes and Willi Ternes, and the infamous group of “Biltmore Musikanten” consisting of Alfred Knauer, Horst Kuehn, Wolfgang Kuehn, Otto Picha, Ewald Wiese and Harald Zimmermann plus new prospects Alfred England, Wolfgang England, Lothar Hirt, and Hans Rosenfeldt were interested in becoming a part of this new venture, but not available until the new year.

Tuesday became the official rehearsal day as Wolfgang England was singing with another choir on Mondays. Unfortunately the VAC had no liquor license and since singing and beer are a time honoured marriage much time was spent before and after rehearsals at the Eldorado Hotel to bond and sooth sore throats.

Alfred Knauer, an accomplished violinist, who had honed his skills in a Russian POW camp, was appointed as the conductor. He was extremely well liked during his many years of dedicated service and will always be remembered for giving the tone using his violin. During his tenure the choir acquired the nickname of “Knauers Barden” – Bards as a result of an article written by Herbert Winter for the German newspaper.

A strong bond of camaraderie and an enjoyment of singing swiftly developed. Practices were anticipated with enthusiasm, gusto and dedication and focused on learning the technique of singing in a four voice choir. A uniform consisting of dark blue blazer, grey slacks, white shirt and black bow tie was adopted and much to the surprise of the fledgling choir, at their debut in the Spring of 1965, the audience responded with a standing ovation. Participation at the Sängerfest followed in the same year in Portland, Oregon, where the choir listed under the name of Vancouver, BC “Alpenclub”, Männerchor sang Morgenrot, Heimat and Hobellied. Soon thereafter, the members, after much debate, agreed to the name MGV LYRA – after an ancient Greek musical instrument.

After an auspicious beginning the choir has continued to attract new members. This was particularly so after each of the Germany trips undertaken in 1974, 1988, 1992 and 1997. As well, the choir has been an integral part of the Vancouver Alpen Club and has performed there on countless occasions. In addition, the powerful voices of the LYRA Mens’ choir have resounded in many communities throughout British Columbia and the United States. Particular memorable are our trips to Los Angeles, San Francisco and Calgary. As well as, the exchange visits with other member choirs of the North Pacific Sängerbund. Thank you for those many invitations and for being such fantastic hosts. This year marks the 20th time that the choir has participated in the Sängerfest – Wow a trilogy celebration – 50 years LYRA and 40th Sängerfest.

There have been many musical accomplishments and highlights but memorable are the singing of the aptly number 13 in our song book – Wagners, “Chorus of the Returning Pilgrims”, the performance of the “Battle Hymn” in San Francisco, the singing of ‘Frieden” in Borken and Berlin and the rendering of “Der Wanderer” at the Sängerfest in Portland.

Condensing 50 years of choir history to one page does not do justice to the many events and activities that the choir has undertaken and experienced and would be seriously flawed if it did not include a heartfelt thank you to all of our conductors and accompanists for their contribution and dedication in helping us keep the tradition of German Song alive. Thank you as well to all who have worn the LYRA blue and to those present singers who are continuing to uphold the custom envisioned by our founding members.

It is unfortunate that during our existence we have seen the departure of member choirs from Abbotsford, Chilliwack, Nanaimo, Prince George and the only other male choir “Frohsinn” from Seattle. Thank you for your camaraderie and many years of enjoyable singing. Who knows what the future will have in store?”